SKU:
DOWNCK0380D
Availability:
Ships from another warehouse. May take up to 3 weeks. Cannot be shipped outside the Continental United States.
$79.95
(You save )
(No reviews yet) Write a Review

×
Chess King Diamond 2018 with Houdini 6 is the new improved version for 2018 of the top selling Chess King Platinum 2017, Silver 2016 and Chess King 4 chess software. It is sold with both Mac and PC installers and allows up to 4 activations in any mix PC & Mac, for example 3 PC installations and 1 Mac installation. Chess King Diamond includes Houdini 6 super grandmaster engine and the new updated 2018 GigaKing game database with over 6 million games, a database of commented games and the largest correspondence database, bringing the total of games included in Chess King Diamond to 6.8 million games.
Includes the super Grandmaster engine Houdini 6
Chess King Diamond includes the new super grandmaster Houdini 6, successor of the most popular chess engine Houdini 5.
Houdini 6 now supports up to 8 threads (cores). Houdini 6 continues the impressive surge made by its predecessor by adding another 50 to 60 Elo in strength. This playing strength increase means that Houdini 6 is stronger than Houdini 5 using twice the time; or in other words, upgrading to Houdini 6 is like doubling the computational power of your computer for chess.
The PC engine Houdini 6 is a standard UCI engine which you can take out of Chess King Diamond and use in other chess programs, for example Chessbase, Chess Assistant or Aquarium.
More information about Houdini 6 can be found at this page.
PC + Mac and multilingual
Both installers for PC and Mac are included in the Chess King Diamond package.
The PC version is compatible with all windows versions from XP, Vista, 7, 8, up to the most recent Windows 10.

The Mac version is compatible OS X 10.11 up to the most recent OS X 10.14 Mojave.
*NOTE* This is NOT compatible with Mac OS 10.15 CATALINA
It can be installed and use in 5 languages: English, French, German, Spanish, and Russian.
Internet connection required only during installation for engine Houdini activation.
Chess King Diamond will help you improve at chess. It’s complete with all the best tools, and it’s easy to use for all levels. Play, learn, analyze, prepare for your opponent, store your own games and share them to the world.
Main features of Chess King Diamond
• Super Grandmaster engine Houdini 6
• Huge opening tree with evaluations and success for each move
• GigaKing 2018 games database
• Classical (any level), Random, Puzzle (1500 puzzles) and Quest modes (100 games)
• Prepare for your opponent, opening and custom trees
Description of Chess King Diamond
Chess King Diamond is a new and versatile tool for chess players and is an ideal introduction for the beginner, a challenging opponent for the practiced amateur, and an invaluable coach for the aspiring master. Chess King Diamond emphasizes simplicity of use in training players. However, it is more than just a traditional training program as it includes an extremely strong chess engine and a huge professional database. It is also a convenient tool for analyzing and studying one's opponent before facing them at a tournament. Buying Chess King Diamond is like getting several products and paying only for one, a professional chess software playing and analysis system, the largest game database available GigaKing, the super grandmaster chess engine Houdini 6, 1500 chess puzzles for all chess levels, a unique random playing mode, and much, much more. Included: Houdini 6, GigaKing Database of over 6 million games, Full opening tree, Chess puzzles, over one hundred opening positions, Photos of over 1600 chess players. Houdini 6 - a chess engine rated well above 3000 Elo is the best choice for analysis, the version included is a major update from the previous version, which already was the world’s top engine used by Grandmasters and chess amateurs around the world. Considering such a strong engine can be frustrating to play against, Houdini 6 includes various kinds of handicaps that can be set up using the Chess King interface. The version of Houdini 6 that comes with Chess King Diamond is a multi-processor one which supports up to 8 cores, it’s a great chess analysis system available today to everyone. The GigaKing database is updated up to the beginning of 2018 and includes a full opening tree. Full Chess960 support. The program is very easy to use, with several video tutorials available on the publisher's site and a possibility to send questions and feedback to the manufacturers.
Get yourself Chess King Diamond or surprise a loved one with the best chess gift of the year.
Play in Classical Mode
You can play at any level you choose, from a rating of 800 to 3200, either with white or black, and either for fun (not counting for rating, you can take back moves), or in rated mode. Your games will automatically be saved in your games database and you will be able to analyze them in detail with the Grandmaster engine Houdini 6 to see what mistakes have been made. 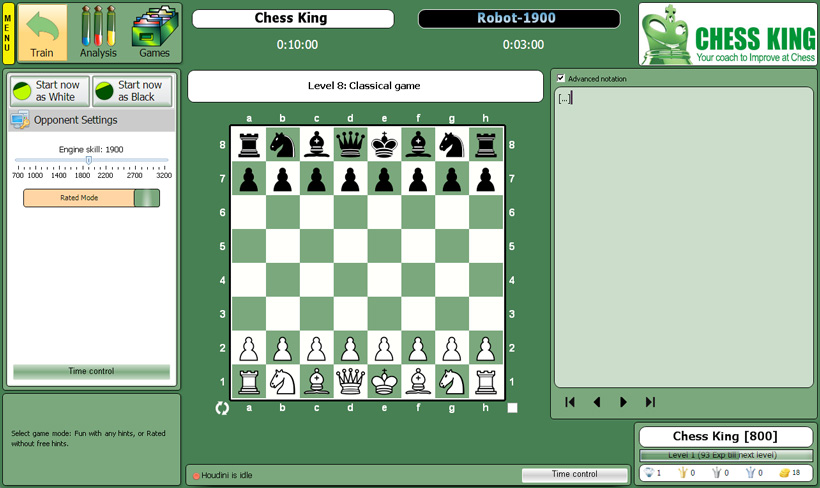 Have fun in the Random Mode
The Random Mode is exclusive to Chess King, in which you can choose what advantage you want to start the game with and the number of pieces you want to have on the board. For example suppose you want to start with an advantage of +6 (the equivalent of 6 pawns advantage), Chess King will randomly select a starting position with the characteristics you decide and then you will play that position against Houdini 6 at the highest level. Anybody should win with such a crushing starting advantage, but you’ll see it’s not that easy! 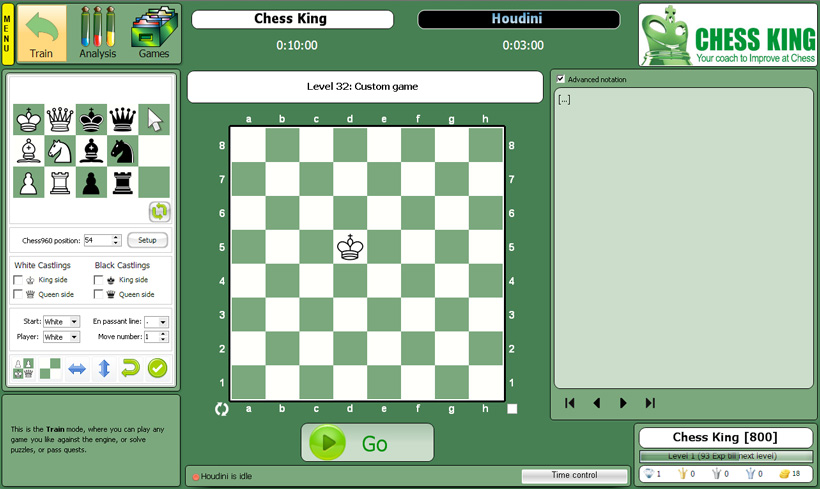 Search in the GigaKing Database
Look out for games of your favorite players in the GigaKing database. For example a search for Magnus Carlsen will give over 1,800 games including all the games he played in official tournaments and many of his published exhibition matches and simultaneous exhibitions. 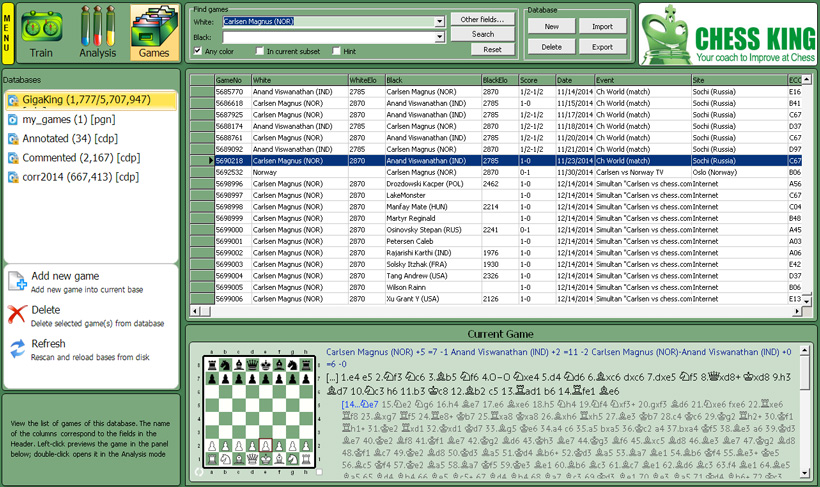 Learn with the Puzzle Mode
You will learn with the puzzle mode, with hundreds of exercises from beginner level until Grandmaster level. Chess King Diamond will congratulate you for your success and tell you where you went wrong. 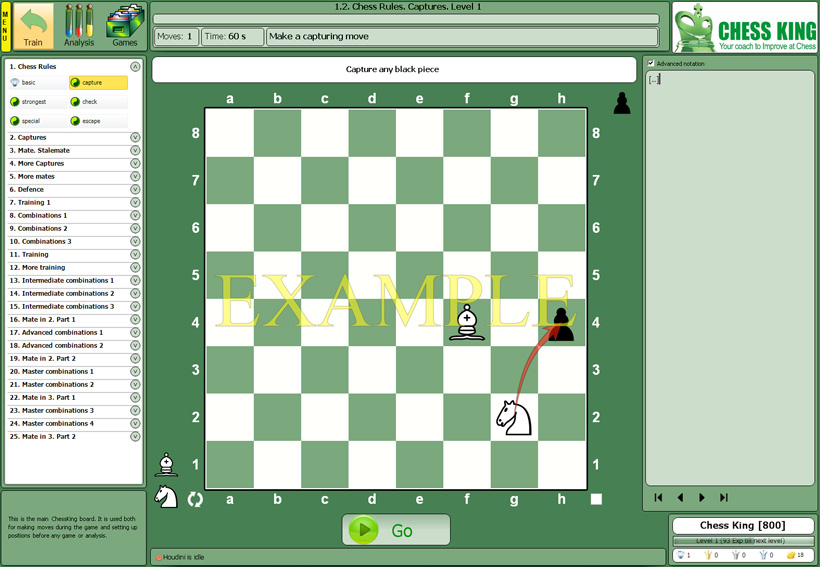 Whole Game Evaluation graph and Houdini 6 Analysis
In the Analysis Pane after the opening stage one sees the game notation and comments, the whole game evaluation graph and below the best lines calculated by the engine Houdini 6. In this position below black could have taken the advantage by taking the pawn on e5, giving an evaluation of -0.86 (Black would have an advantage of close to 1 pawn equivalent), and instead played a bad move a4, which gave an evaluation of +0.49, which means white is up the equivalent of 1/2 pawn. With Chess King Diamond you will know the best moves in each position. 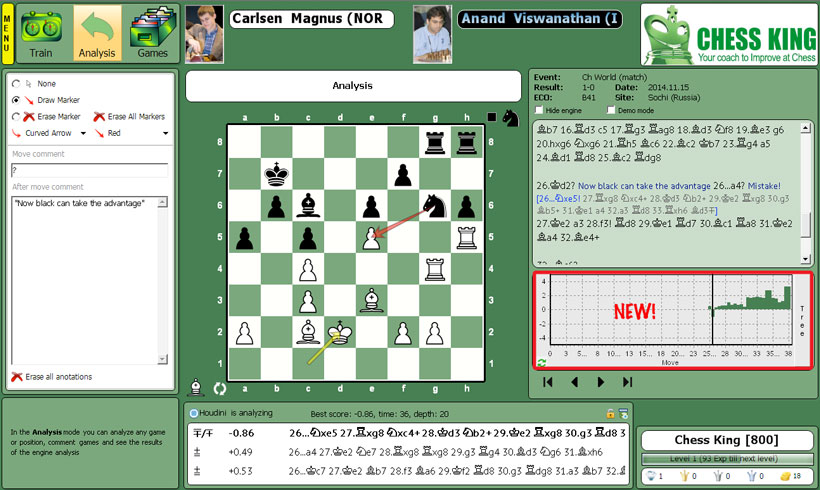